In what can be considered as mission impossible, 3 Sikhs along with the Lubana Vanjara Sikh traders in Delhi devised a master plan to rescue the body and head of Sri Guru Tegh Bahadur Sahib Ji after martyrdom. 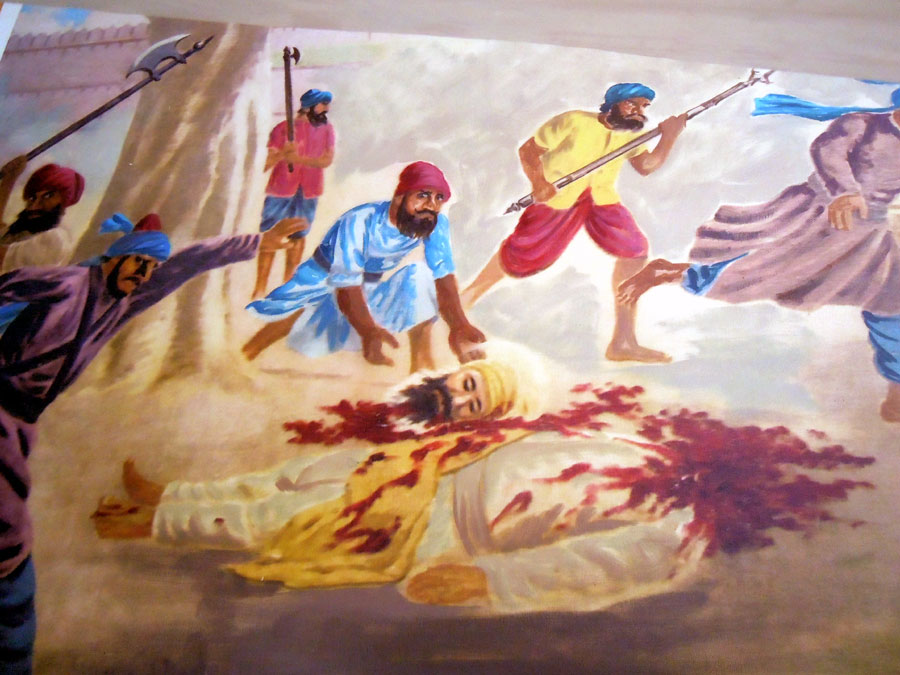 Sikh Lobanas played many important role during the times of the Sikh Gurus (in Gurukaal). Lobanas (or Labana) are a tribe who live all over India. Labanas have their own language called “Lubanki” which is a dialect. However, this language is only spoken by Labanas outside the Punjab, state of India. The Labanas of Punjab and Haryana are mostly Sikhs and speak mainly Punjabi or Hindi. The term Lobana appears to have been derived from Salt Trading, LUN (“salt”) and the BANA (“trade”) & Iron Dress up, Loh (Iron) and Bana (Dress), which relates them with trading and warriors too.

The following is an excerpt from Bhai Vir Singh’s Kalghidhar Chamatkar and narrates a conversation between Sahib Chan and Hardita.

After, Guru Sahib was martyred Bhai Uday, Bhai Jaita, and Bhai Lakhi Shah Vanjara came up with a genius plan to rescue the head and body. There was a dust storm while the rescue of the head and body was occurring due to a nearby fire caused by Lubana Sikhs.

The fire was set on purpose to create smoke like conditions so that when Bhai Lakhi and Bhai Jaita rescue the body no one would be able to see as the dust would have dispersed the crowd and took Mughal eyes off of the Sikhs.

“Sahib Chand: Guru Tegh Bahadur’s head, one devotee brought to
Anandpur. But the story of the body is wondrous.

Hardita: It is said that when the executioner Syed Adam beheaded Guru
Tegh Bahadur With his sword, the head that separated from the body did not
fall en the ground. At that time, in the crowd that had thronged to see what
would happened, two of Guru devotees, Jaita and Uday had reached there in
Muslim dress with intention to carry the head away in as best a way as possible.

Sahib Chand: Yes, they were those whom the Guru had blessed the
Lord’s name and made them Lord’s beloveds when the country-men considered
them of low caste.

Hardita: I so happened that at the time of execution, a dust storm blew
hard that there was so black smoke seemed as if it was night, like an earthquake came and the entire town .
was in awe and fear. In that commotion, Bhai Jaita put the sacred head in a
sheet and like a bundle carried it on his head and left Delhi. The executioners
and the public were all In awe and fear. This happened at the Police Station at
Chandni Chewk. Bhai Uda dressed in Muslim robes remained near in the
hope that Lord shall make some say that he may carry the body also.
Mere sometime when the storm subsided it was announced that if any devotee of
the Guru wishes to take the body, he may do so. Actually it was a trick that if
somebody comes, then we will arrest him and find out who was that who
carried the head away despite the police standing there. But none of the
Hindus or even the devotees of the Guru came forward. In the evening one
devotee Lubana alias Vanjara who had unloaded many cart-loads of lime at
the Red Fort and was returning with his empty carts, then Bhai Uda told him:
This is the time you can do service to the Guru. Do not lose this chance of a
lifetime.

So both decided and proceeded with their line of empty carts towards
Chandni Chowk. The irritating smell from the lime made the sentries put
handkerchiefs on their noses and they moved away from their places. Then
both of them moved the carts near to the place of execution. It is mentioned
that the carts were around one hundred in number. They noticed that
the body was lying un-attended, they carried it, covered it with sheets, and put
it on one of the carts. They reached their village that was about three kilometres
from Chandni Chowk. Hurriedly they collected some wood, put the body on
it, said a prayer and lit a fire. The fire engulfed the entire village.
It became a mystery how the Guru’s body had vanished.

In the pell-mell, wherever the Policemen doubted ,they started searches
in the houses of Guru-disciples. One whimsical Police man rode a horse and
went after Lakhi. What he saw there was that they had 1 not even parked their
carts but the entire village was on fire and all the villagers were trying to put
off the fire. Then, the doubt in his mind vanished. But still he inspected the
carts and was satisfied in his mind that they have not carried away the body.
When the police went away, then Lakhi who was on showing off that they
are extinguishing the fire started putting more wood at the place where the
body was burning. In this way, the devotees, the great devotees saved the
sacred body from the hands of the tyrants and cremated the sacred body of
the great Guru who had sacrificed his body for their sake.

Sahib Chand: This is what is called devotion. This is love from the core of
the heart. It is foolish for Aurangzeb to treat the Lord’s loving people with
tyranny. Those who are in forgetfulness of the Lord shall die but those
who are immersed in the love of the Lord, they are fearless and already
detached from the body and the worldly gains. They can win over their
fearlessness? When the love rays from the Lord brings radiance in the mind,
then they become drops of diamond that give eternal radiance. Who can put
off that radiance? To try to kill the Lord’s beloveds is inviting self annihilation.
The kingship creates ego. Who is that who amasse power and keeps the
mind in peace, maybe he is some rare fortunate person. ”

Bhai Lakhi Shah Vanjara was a devout Sikh who lived during the time of the ninth Sikh Guru, Guru Tegh Bahadur. He hailed from the Lobana community of Sikhs, who played an important role during the times of the Sikh Gurus. He was a trader and a contractor and supplier for the Mughal Army and supplied them with saddles, bridles(rakabs) and reins. He also traded in cotton, lime powder(chuna). He lived in Raisina village with his family. He had three sons, Hema, Nagahiya and Harhi and a daughter named Seeto bai.

Bhai Lakhi Shah was present in Delhi on 1675 when Guru Tegh Bahadur was executed at the orders of Aurangzeb. A dust storm had hit Delhi at that time and the Mughal soldiers ran for cover. Bhai Ude and Bhai Lakhi Shah had devised a plan to recover Guru Ji’s body and he planned to bring several bullock carts loaded with cotton through Chandni Chowk at that time. The carts travelling at considerable speed blew more dust into the air, which added to the dust from the storm, adding to the chaos and further reducing visibility. At the risk of his own life, under the cover of darkness and in the dust storm, Bhai Lakhi Shah was able to remove the headless body of the fallen Martyr, with the help of his son Nagahiya, in a cart which was loaded with cotton, and carry it to his humble home. As it was too dangerous to openly cremate the body (the Mughals had planned to desecrate the Guru’s remains and put them on public display) he did so by setting fire to his home, concealing the cremation of the Guru’s body. At the same time, Bhai Jaita was on his to Anandpur Sahib with Guru Tegh Bahadur Sahib’s head.

Afterwards Lakhi Shah, accompanied by his companions, traveled to Anandpur to pay homage to Guru Gobind Singh and let him know that his father’s body had been given the final rights.

Several key incidents in time of the ninth and tenth Gurus are attributed to the Lobana Sikh community. Baba Makhan Shah was a devout Sikh who was responsible for finding the ninth Sikh Guru, (Guru Tegh Bahadur). The Lobanas fought in many battles with Guru Gobind Singh and Baba Banda Singh Bahadur.

Gurudwara Rakab Ganj Sahib in Delhi marks the site where once stood the house of this dedicated Sikh.