Ten Teachings About Guru Nank Dev Ji You Must Know

Not in any particular order

There is One God

“There is but One God, His name is Truth, He is the Creator, He fears none, he is without hate, He never dies, He is beyond the cycle of births and death, He is self illuminated, He is realized by the kindness of the True Guru. He was True in the beginning, He was True when the ages commenced and has ever been True, He is also True now.” (Japji) 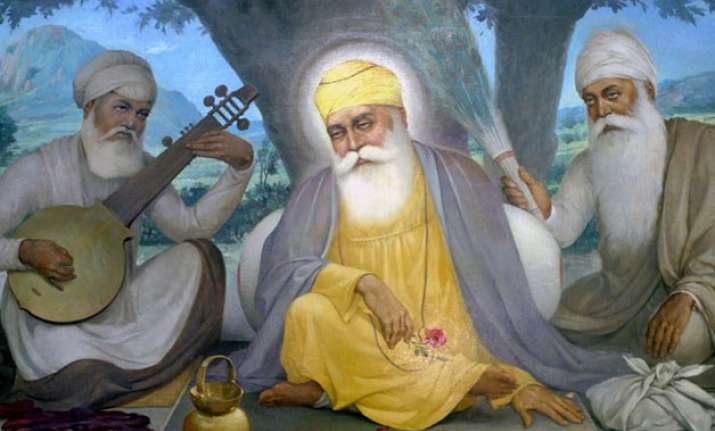 This pronouncement was substantial as it referred to the day and age in which Guru Nanak Dev Ji lived: Hindus and Muslims of India constantly and bitterly fought each other over the issue of religion. The Guru meant to emphasise that, ultimately, in the eyes of God, it is not religion that determines a person’s merits, but one’s actions. The Guru witnessed the Mughal invasion of India, and saw the horrors inflicted upon the common people by the invaders. Guru Nanak Dev Ji did not hesitate to speak up against injustice: 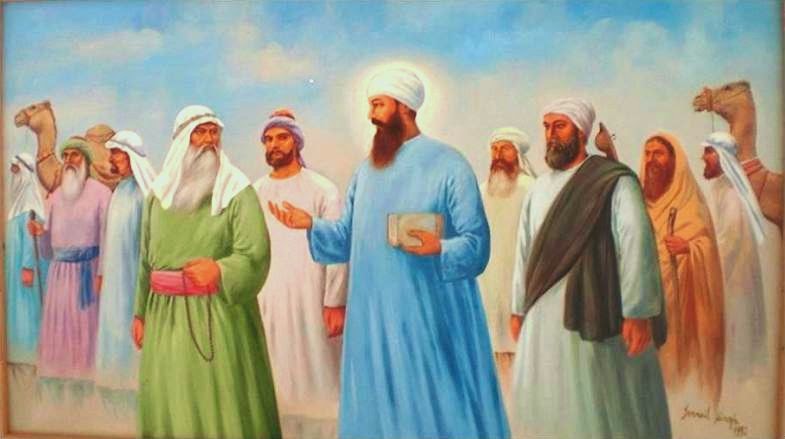 Guru Nanak Dev Ji laid forth three basic principles by which every human being should abide:

1. Naam Japna Guru ji led the Sikhs directly to practise Simran and Naam Japna – meditation on God through reciting, chanting, singing and constant remembrance followed by deep study & comprehension of God’s Name and virtues. In real life to practice and tread on the path of Dharam(righteousness) – The inner thought of the Sikh thus stays constantly immersed in praises and appreciation of the Creator and the ONE ETERNAL GOD Waheguru.

2. Kirat Karni He expected the Sikhs to live as honourable householders and practise Kirat Karni – To honestly earn by ones physical and mental effort while accepting both pains and pleasures as GOD’s gifts and blessings. One is to stay truthful at all times and, fear none but the Eternal Super Soul. Live a life founded on decency immersed in Dharam – life controlled by high spiritual, moral and social values.

3. Vand Chakna. The Sikhs were asked to share their wealth within the community by practising Vand Chakna – “Share and Consume together”. The community or Sadh Sangat is an important part of Sikhism. One must be part of a community that is living the flawless objective values set out by theSikh Gurus and every Sikh has to contribute in whatever way possible to the common community pool. This spirit of Sharing and Giving is an important message from Guru Nanak.

“We are born of woman, we are conceived in the womb of woman, we are engaged and married to woman. We make friendship with woman and the lineage continued because of woman. When one woman dies, we take another one, we are bound with the world through woman. Why should we talk ill of her, who gives birth to kings? The woman is born from woman; there is none without her. Only the One True Lord is without woman” (Guru Nanak, Var Asa, pg. 473)

In the Sikh ardas (Prayer) we as for peace and well being for all of mankind, it’s one of the most important teachings.

“Truth is high but higher still is truthful living.’

Like all the Gurus after him, Guru Nanak Dev Ji preached by example. During a time of great social conflict and religious decay, his message served as a fresh, uncorrupted approach towards spirituality and God. The Guru founded the institutions of Gurdwara, Sangat and Pangat. He introduced the concept of suitability for Guruship by ignoring his sons and appointing Bhai Lehna Ji as the second Sikh Guru to continue spreading his teachings. He departed for heavenly abode on September 7, 1539. The message of the Guru Ji took almost 240 years to unfold, and so, in accordance with the Will of God, the soul of Guru Nanak Dev Ji merged into the souls of his nine successors.

When in the middle east, the west and the rest of asia slavery, varna/class and race discrimination was rife and respect between the different classes and caste was at a peak, Guru Nanak preached against discrimination and prejudices due to race, caste, status, etc. He said: “See the brotherhood of all mankind as the highest order of Yogis; conquer your own mind, and conquer the world.” (SGGS page 6); also “There is one awareness among all created beings.” (page 24) and finally “One who recognizes the One Lord among all beings does not talk of ego. ||4||” (page 432). He urges all the peoples of the world to “conquer” their minds to these evil practises. All human beings had the light of the Lord and were the same — only by subduing one’s pride and ego could one see this light in all.

Universal message for all people

It had been a custom at the time for religious leaders to address only their own congregation and for segregation of the different religions — but Guru Nanak broke with tradition and spoke to all of humanity. To the Muslim he said: “And when, O Nanak, he is merciful to all beings, only then shall he be called a Muslim. ||1||” (page 141); to the Hindu, he said “O Nanak, without the True Name, of what use is the frontal mark of the Hindus, or their sacred thread? ||1||” (page 467); and to all he preached: “To take what rightfully belongs to another is like a Muslim eating pork, or a Hindu eating beef.” (page 141).

Guru Nanak was a great traveller. He walked thousands of miles on foot. He spent about thirty years of his life traveling. He went to the East, the South, the North and the West. He went to Ceylon and Kashmir. His friends Bala and Mardana were also with him. They traveled for a pretty long time. They would stay for the night at some village and start next morning Guru Nanak and his friends would sing hymns and the people of the village would come to hear them.

One day Guru Nanak reached Eminabad. There lived a poor carpenter. His name was Lalo. The Guru stayed with Lalo who served him with loving care. Guru Nanak enjoyed the simple food of Bhai Lalo very much. He stayed there for some days. There was also a very rich man, Malik Bhago in that village. He wanted to make a show of his money. He gave a big feast. He invited many people to this feast. Guru Nanak was also invited. But Nanak would not go. Malik Bhago came to the Guru and said, “Why don’t you come to my rich feast, 0 Nanak? Am I no better than a poor carpenter?”

“No, Malik Bhago. I see no difference between man and man. I like simple food so I stayed with Bhai Lalo. If you must take me along, I am ready to go,” replied Nanak.

Guru Nanak Squeezing the foodSo Guru Nanak went to the feast. He took with him some simple food from Bhai Lalo’s house. When the rich food was served to all, Guru Nanak also sat down among the people. Before anybody started eating, Guru Nanak stood up. He held in one hand the simple food which he had brought from the poor man’s house. In the other hand he took the rich food from the feast. All the people looked at him in surprise. He squeezed the two foods. From the poor man’s food came drops of milk and from the rich man’s food fell drops of blood. All the people were surprised.

Malik Bhago was very angry. He felt small. He asked Guru Nanak why he had done this magic. Guru Nanak said, “This is not magic, this is the truth. A poor man’s food is clean. He works hard for it. That is why milk runs out from it. Your food is not clean. You do not get it by honest work. You are unkind to the people who work for you. You squeeze their blood. That is why blood has come out of your rich food.” Malik Bhago could say nothing. He bowed before the Guru and promised to be kind to the workers and to work honestly with his own hands.

“Work harder and share with others Nanak, You will see God this way.”
Guru Nanak

“The Lord knows our needs and gives, Few there are that praise His blessings, He who thanks the Lord and in His will lives, 0 Nanak, is the King of kings.”
Guru Nanak

“If it please the Lord in holy water I would bathe. If it pleases Him not worthless is that pilgrimage In the whole world of ours None without actions, sees the Lord.”
Guru Nanak

“Cruelty, false love, greed and anger are four streams of fire. They who fall into them are burnt, O Nanak. Only those are saved who cling to His feet.”
Guru Nanak

SANGAT AND PANGAT –  In order to implement his teaching Guru Nanak brought a social and religious revolution by providing a platform of SANGAT and PANGAT where people would sit together, pray together, and eat together without any caste, colour, creed, or faith.  Nobody was considered inferior or superior regardless of his birth and wealth.