Probably every indian knows about 300 (movie) but no one knows about Battle of Saragarhi, because it was omitted from the Indian syllabus. This is something that every Indian kid should read in the school to learn commitment, grit and valor. Probably Bollywood should make a movie based on their heroism, it was a epic battle as you will know after reading below article. Don’t forget to share it !

Saragarhi, itself, was little more than a small block house and a signaling tower. It was constructed to enable communications between Fort Lockhart and Fort Gulistan, two more significant British posts situated on either side of Saragarhi, albeit several miles apart. 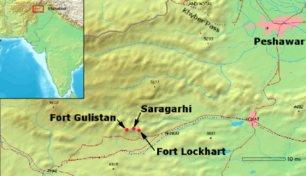 Equipped with a heliograph, Saragarhi transmitted messages by using flashes of sunlight, sent much like telegraphic communication (read: Morse code). The flashes themselves were made by either pivoting a mirror or interrupting a beam of light.

The Battle of Saragarhi was fought before the Tirah Campaign on 12 September 1897 between 21 Sikhs of the 36th Sikhs (now the 4th Battalion of the Sikh Regiment) of British India, defending an army post against 10,000 Afghan and Orakzai tribesmen, other estimates put the opposition force above 13,500+. The 21 Sikhs defending against a massive border incursion while positioned in sentry defense of the foremost positioned tiny garrison on the line.

At 0900 on 12 September, the 10,000 Afghan’s under cover of pre-dawn darkness initiated their attack against the Sikh held garrison. The defending Sikh’s relay a message to their British higher headquarters and inform them a massed attack is underway. The British Army replies, indicating they cannot form a reinforcement and essentially communicate the 21 Sikh’s are on their own against 10,000 scream and attacking Pashtun commanders and fighters armed with heavy artillery and rifles.

The initial Pashtun assault commences with heavy, accurate artillery strikes to prominent fortifications. The following events are taken as verbatim accounts of the battle’s development as they were in real time personally communicated via signals chronologically by the Sikh warrior and one of the 21, Gurmukh Singh who fought in, observed, coordinated and reported the play by play of the battle throughout the day. At 0930 the initial Pashtun assault is driven back violently by Sikh rifleman positioned upon the fort walls who kicked over Pashtun assaulter ladders and drove cyclical murderous rifle fire within the dense hoard below them targeting the tops of heads. Over 3,500 Pashtun’s are driven back while the Sikh’s reportedly killed so many bodies, in many places they fell upon each other measuring over 10 feet in height.

Battle of Saragarhi, which has, in fact, been listed as one of the top eight battles of bravery by UNESCO.

At roughly 1015, the Pashtun’s end the attack and dispatch a herald before the fort’s defensive walls under white flag of truce and begin to communicate conditions to include acceptance of surrender would come with safe passage and a reward or riches. This gesture is promptly rejected via intensive Sikh fires targeting not the only heralding messenger but effectively the distant Pashtun line inciting them to fight which they do, and are promptly again driven to a forced retreat after losing considerable numbers in open ground by effective devastating Sikh bolt action rifle fires. The Pashtun’s respond with a 90 minute barrage of artillery fires, destroying two observation towers and within this time around mid afternoon encircle the cubical fortification and begin setting fires to wooden reinforced entry portals and sally ports.

By 1500 hours a breach had occurred, allowing the Afghan’s to flood the inner quadrangle and allowed surviving Sikh defenders to leap upon them screaming, shirtless and knives drawn from the height of the fort’s inner perimeter catwalks and a lengthy cataclysmic orgy of primitive and profound hand to hand combat ensued. The Sikh’s slashed throats and stabbed vital organs of their attackers, commandeered the rifles of the dead and unloaded into the teeth of the assaulting Pashtun’s. Gurmukh Singh, who communicated the battle in it’s entirety by signal with nearby British Col. Haughton, who was without sufficient reinforcements and unable to assist, was the FINAL Sikh defender. He is stated to have killed 20 Afghans, the Pashtuns having to set fire to the observation post to kill him. He lept while burning, knife drawn and fell into the writhing mass of Pashtun’s. As he was dying he was said to have yelled repeatedly the Sikh battle-cry “Bole So Nihal, Sat Sri Akal” (Shout Aloud in Ecstasy! True is the Great Timeless One). “Akal,” meaning Immortal, beyond death, the Supreme Creator God unbound by time and non-temporal. 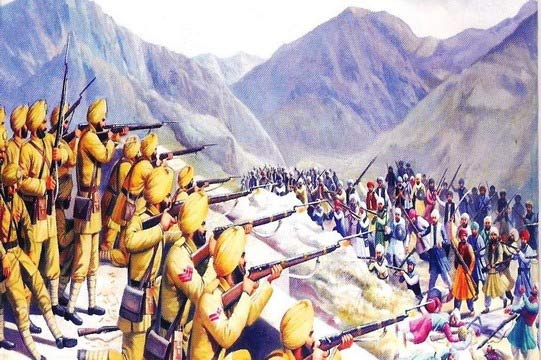 The following day when thousands of British Army reinforcements arrived and successfully repelled the Afghan’s, exactly 21 Sikh MEN were found, most shirtless, all knives drawn from hip sheaths, and covered in blood surrounded by over 600 dead Afghan fighters. Not a single, not ONE SINGLE ROUND remaining was discovered in any Sikh ammo carrier, magazine, nor rifle itself. All munitions, including the reserves were categorically expended during the battle in it’s entirety per each Sikh Warrior to the last, living MAN.

All of the 21 Sikh non-commissioned officers and soldiers of other ranks who laid down their lives in the Battle of Saragarhi were posthumously awarded the Indian Order of Merit, the highest gallantry award of that time, which an Indian soldier could receive by the hands of the British crown, the corresponding gallantry award being Victoria Cross. This award is equivalent to today’s Param Vir Chakra awarded by the President of India. They the 21 were ALL born in Majha region of Punjab. 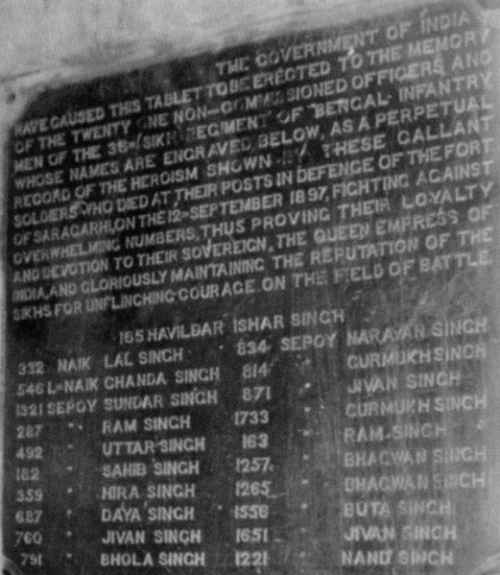 Saragarhi Memorial Gurudwara (Sikh temple) was built in memory of the 21 Sikh soldiers that fought at The Battle of Saragarhi.