Sri Harimandir Sahib Ji is built on the lower level and is open from four sides, to make it accessible to every person without any distinction of caste, creed, sex and religion.

The Harmandir Sahib, also known as Sri Darbar Sahib or the Golden Temple (on account of its scenic beauty and golden coating for English speaking world), was started by the fourth guru of the Sikhs, Guru Ram Das, in the 16th century.

Shri Guru Arjan Sahib, the Fifth Nanak, conceived the idea of creating a central place of worship for the Sikhs and he himself designed the architecture of Sri Harmandir Sahib. Notably, the foundation of Sri Harmandir Sahib (the temple of god) was laid by Muslim saint Hazrat Mian Mir of Lahore in 1588. The construction work was directly supervised by Guru Arjan Sahib himself and he was assisted by the prominent Sikh personalities like Baba Buddha ji, Bhai Gurdass ji, Bhai Sahlo ji and many other devoted Sikhs. The main structure of the shrine was completed in 1601. 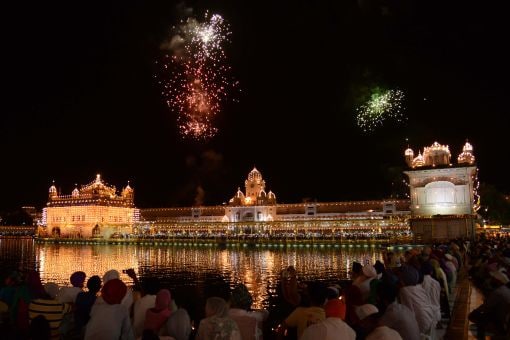 Sikh devotees watch a fireworks display above the illuminated Sri darbar Sahib in Amritsar on the occasion of 409th anniversary of the installation of the Guru Granth Sahib. Image: AFP
Unlike erecting the temple structure on the higher level, Guru Arjan Sahib got it built on the lower level and got it open from four sides, in an effort to make it accessible to every person without any distinction of caste, creed, sex and religion, which symbolize the openness of the Sikhs towards all people and religions. Located in Amritsar, 450 km from the national capital, it is built in the midst of a huge ‘sarovar’ (pond) which sparkles with the reflection of the gold structure. There are four gateways one can take to reach the place where the Guru Granth Sahib (the Sikh Holy Scripture) is housed. 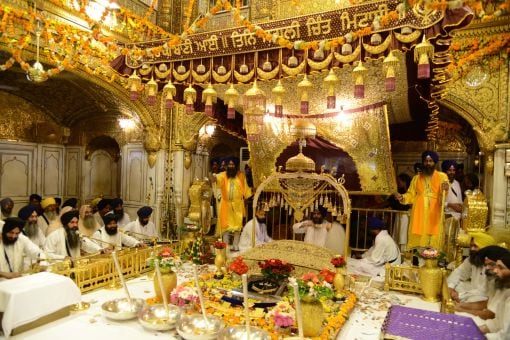 Sri Guru Granth Sahib during a ‘Jalau’, a splendour show of Sikhism’s symbolic items, inside The Golden Temple in Amritsar on the 409th anniversary of the installation of the Guru Granth Sahib. Image: AFP

Surrounding the pond are two huge clock towers, atop of one of which is a museum narrating the history of the Sikhs. Adjacent to the clock tower is a building which provides free food to the thousands of pilgrims that throng the place every day. On festivals and special days, over 100,000 devotees partake of the ‘langar’ (community kitchen).

As people from all over the country and even abroad visit the place, it is not an easy task to reach the  Gurudwara. One has to wait in long queues, which however is not very tiring, as there are a lot of people assisting you with water and other requirements. From a young boy, around seven years of age to an old man who should probably be resting at home, many such can be seen volunteering and rendering yeoman service. 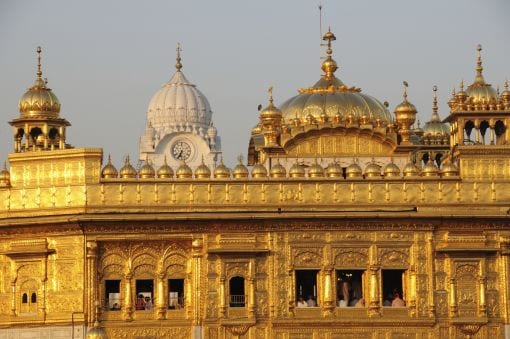 The tranquility is overwhelming. You cannot just stop admiring the intricate designs in gold that adorned the pillars and walls of the temple.
The sanctum sanctorum is a two-storeyed marble structure built on a 67-square foot platform with gold leaf adorning the outer walls of the structure and the inside also lined up with pure gold. With prayers being offered on all the storeys, the higher you go up taking the winding marble staircase you actually experience a sense of peace and fulfillment. 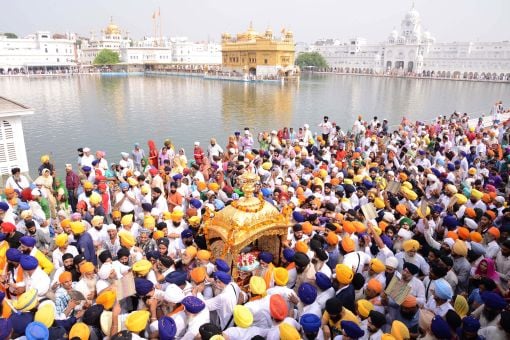 Every spiritual place will have some or the other history to narrate and the Golden Temple too has one, which is rather horrid. The shrine was desecrated in 1757 following Ahmed Shah Abdali’s invasion. The present day Gurdwara was rebuilt in 1764 by Jassa Singh Ahluwalia, a prominent Sikh leader during the period of the Sikh Confederacy, with the help of other Sikh Misls. In the early nineteenth century, Maharaja Ranjit Singh secured the Punjab region from outside attack and covered the upper floors of the Gurdwara with gold, which gives it its distinctive appearance and its English name. Then in 1984 the Akal Takht was attacked by the Indian Army and was severely damaged.