Guru Gobind Singh was famous for his blue coloured horse. In fact Guru Sahib is sometimes known as “Neelay ghoray whalla” or “one with the blue horse” and many a folk songs and vars sing the exploits of “Neelay ghoray they swaar” or “the rider of the blue horse”. Just as his grandfather Guru Hargobind sahib, Guru Gobind Singh instructed his Sikhs to make offerings of arms and horses in readiness for the turbulent times ahead. In anticipation of this Guru Gobind Singh learnt the art of horsemanship from an early age under the guidance of his maternal uncle, Bhai Kirpal Chand. 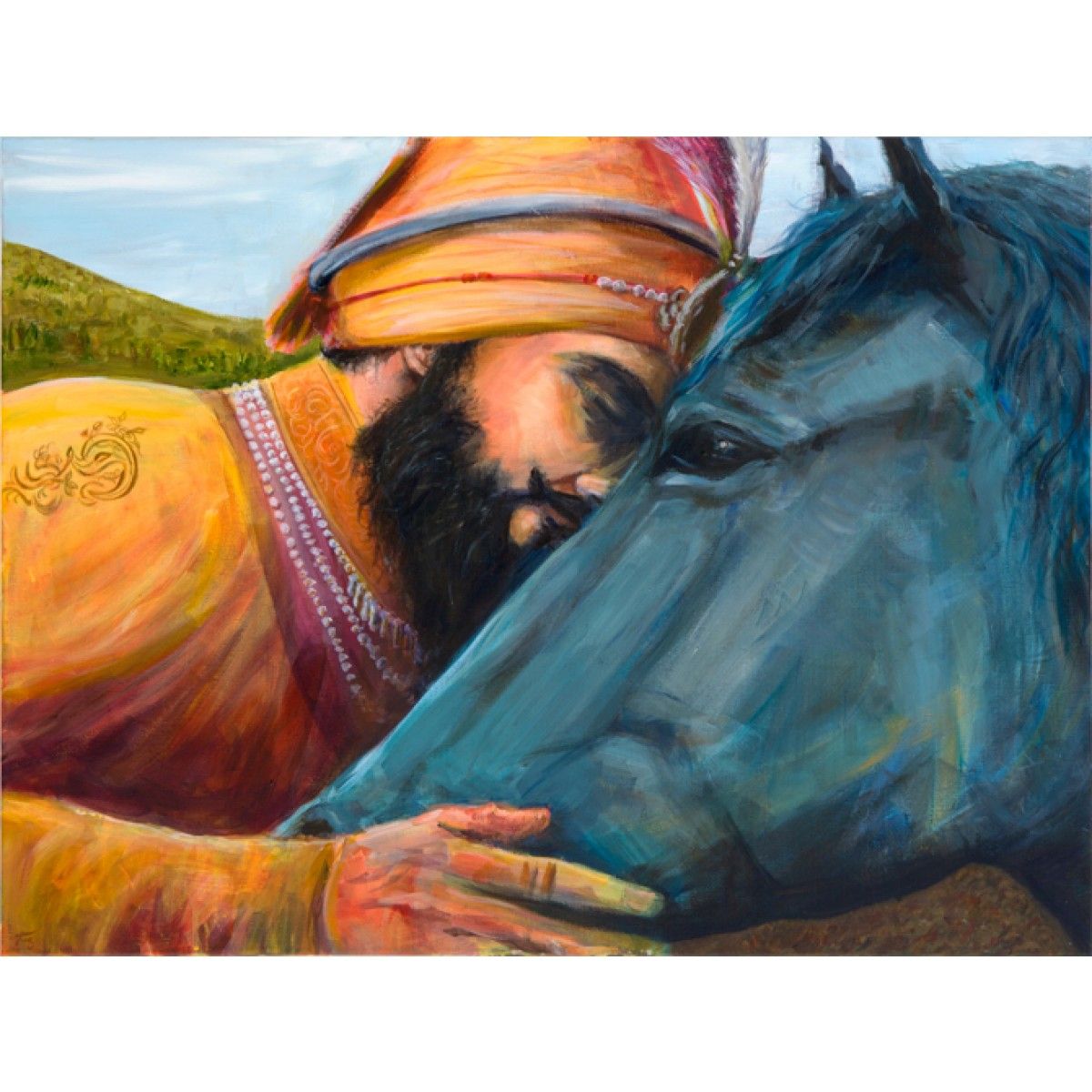 As Guru Sahib grew older, he became an accomplished horseman and would spend time travelling the country-side on horseback blessing his people who would inevitably gather wherever he went. It is not clear where the blue horse, affectionately known as Neela (meaning “blue”), was acquired from. It may have been a gift from a royal dignitary or from a devotee. Even today the lineage of the stallions continues at Hazoor Sahib, Nanded.

The horses are kept in stables and are bred from the original stallion belonging to Guru Sahib, although over time the blue colour has been diluted down to a grey white. No one is allowed to ride the horses as a mark of respect and they are brought out on the festival of Holla Mahalla or gurpurbs when they are beautifully decorated with tassels and riding gear.

On occasions, especially on the festival of Holla Mahalla, it has been said that the horse will get extremely sweaty and agitated, as if it is being ridden. It is difficult to get information about Guru Sahib’s horse, even more so about a blue horse. These horses are very rare and many people are sceptical that such horses exist.

Two Stories of the Blue Horse
The gurdwara at Putthi Sahib, Punjab
Here the Gurdwara commemorates the incident when Guru Gobind Singh Ji arrived at this place from a long journey on their way back to Anandpur Sahib. They say a man working at a kiln (putthi) baking bricks. Upon enquiring from the local artisan if there was a place to rest, the local gestured at his furnace and said mockingly “If you call yourself Guru why don’t you rest here in the furnace?” 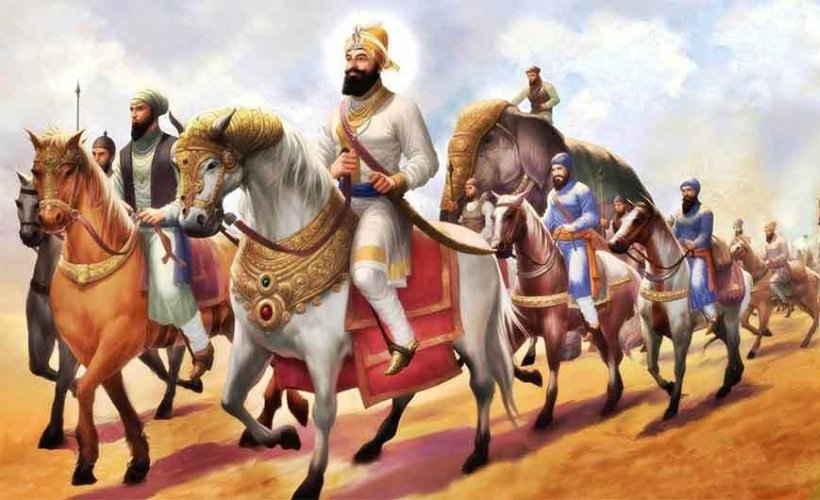 This posed a direct challenge to the Guruship, and whereas Guru Sahib Ji would much rather have not revealed the full extent of the divine seat of Guru Nanak in this case there was no option. Guru Ji ushered Neela forward who trampled on the mud surrounding the kiln and put one of his hooves on the side of the kiln. Whereas a brick kiln would normally take a week or so to cool down the furnace became instantly cool. Guru Ji demounted Neela and rested for the night in the furnace. The gurdwara that now stands there has been built around the now solidified mud which still has the impressions of Neela’s hooves. Kotla Nihang Khan and the ‘Rider of the Blue Horse

Kotla Nihang Khan, about two and a half kilometres south of Ropar (30″58’N, 76°31’E), owes its prominence to Gurdwara Bhatta Sahib.
The village is named after its once local chief, Nihang Khan, a god fearing Afghan contemporary of Guru Gobind Singh. Guru Gobind Singh first visited Kotia Nihang Khan while on his way back from Paonta to Anandpur. The site of the present Gurdwara Bhattha Sahib used to be a Bhatha (a brick kiln) which was used to slake lime for mortar and whitewashing of walls. The kiln which was in use at the time belonged to the local chief. It is said that the kiln was still smouldering hot when the Guru arrived here on Magghar w/r/iAmavas, 1745 Bk/12 November 1688 and, inadvertantly or otherwise, rode right onto the kiln’s covering.

There is a fascinating story about this incident, as soon as the hooves of the Guru’s horse touched the kiln, it cooled. Seeing this, Nihang Khan fell at the Guru’s feet and became forever his devoted follower. He escorted him to his haveli and put him up for the night with due reverence and attention. The Guru again passed through Kotla Nihang Khan while returning from viewing the solar eclipse in 1702/1703.

Blue Roan
Well, blue horses do exist. The colour is officially known as Blue Roan. Roan horses have solid coloured coats, but with white hairs interspersed (roaning). The white hairs are not actual spots, but single white hairs mixed with the darker coat colour. These horses have a specific colour gene and this roan gene can be applied to any colour of horse. The most common are Red Roans and Bay Roans. There are also Palomino Roans, Red Dun Roans, Dun Roans, Buckskin Roans and the Blue Roan. The roan gene adds white hairs into the body of the horse. Roan is a stable colouration throughout life, whereas Grey and Varnish Appaloosa are progressive.

The legs and occasionally the head are not affected and will remain darker then the body (note in the above painting, Guru Sahib Ji’s horse is shown as blue, but not the legs).The mane and tail are usually not affected, but some may have some white hairs mixed in. A Blue Roan is a dark coloured horse with the roan gene.The roan gene gives the horse interspersed white hairs on his body and this gives a general blue hue or sheen to the horse. Blue Corn is a variation of Blue Roan, in which speckles and spots of the base colour (black) appear, making a mottled appearance.