Mata Gujjar Kaur ji: Wife of Guru Teg Bahadur Ji, mother of Guru Gobind Singh Sahib Ji. Guru Gobind Rai assumed the Guruship at the age of 9. During those early years of his life, his father, Guru Teg Bahadur, decided to make an extensive tour of the eastern parts of India, his purpose was to preach the Sikh faith among the people there. The responsibility for training Gobind Rai (Guru Gobind Singh Ji) was left in the hands of his mother, Mata Gujjar Kaur Ji. What kind of woman must she have been to be chosen by God to teach and guide Gobind Rai (Guru Gobind Singh Ji) so that he would be capable of assuming the Guruship?

He was a human boy, but He had the most divine mother who instructed Him in the ways of wisdom so thoroughly that He was ready to take on the responsibility for his destiny when He was nine years old. 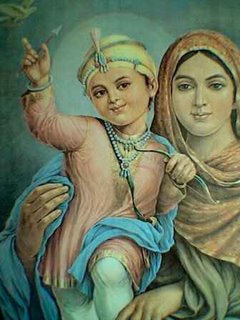 “…God works through a woman’s touch. Man is what woman creates him to be…”

Gobind Rai (Guru Gobind Singh Ji) was what he was, but the destiny of his soul was entrusted to Mata Gujri Ji’s care it was the touch of his mother through which God could awaken him. And didn’t the Gurus teach us – those who are truly married are one soul in two bodies? If this is Divine Truth, can we possibly say that Mata Gujjar Kaur Ji and Guru Teg Bahadur Ji were one soul in two bodies?

…One mission with two faces – the public and the private, the male and the female, the conscious and the subconscious, the power and the wisdom…

If marriage creates us as one soul in two bodies – then what is the difference between Guru Teg Bahadur Ji and Mata Gujri Ji except that they had two different jobs to do, two different times and spaces, yet sharing one light between them.

As a Daughter: Mata ji was brought up with the consciousness of the Guru’s light; she fulfilled her parent’s aspiration of serving the path of the Guru beyond their expectations by growing into a perfect role model of grace, strength, persistence and sacrifice.

As a Wife: She supported Guru Tegh Bahadur Ji when he was deep in meditation for years, again while he was on his missionary tour, and finally, when the Guru left for Delhi to make the supreme sacrifice.

As a Leader: After her husband, Guru Tegh Bahadur Ji’s martyrdom, she and her brother, Kirpal Chand had the responsibility of managing the affairs of the Panth. She also organized the langar (community kitchen) and played an important role as the administrator of the army. She had an important role inspiring the Khalsa armies during the battles Guru Gobind Singh Ji had to fight. Her role in the battle of Bhangani is especially remembered.

As a Mother: She molded the father of the Khalsa, the great Guru Gobind Singh Ji, raising him as a single mother after the martyrdom of Guru Teg Bahadur ji. 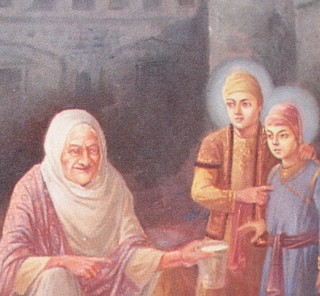 As a Grandmother: She was an inspiration to the young martyrs, her own two grandchildren. When Mata Ji and the sahibzadas were arrested and confined in Sirhind Fort, and as the children were summoned to appear in court each day, she kept urging them to remain steadfast in their faith. She constantly reminded the Sahibzadas that their Grandfather and Great-Grandfather had both sacrificed their lives to strengthen the ideals of Sri Guru Nanak Dev Ji. Her support of her grandsons played such an important role in Sikhism that as Sikhs, we probably owe our existence to her. It was due to her role that the seven and nine year old children did not budge from their beliefs and attained martyrdom. If the Sahibzadas had accepted Islam on that winter day, Sikhi probably wouldn’t exist as it does today. So, in fact, we stand tall because of the teachings and the inspiration Mata Ji provided to her grandsons and thousands of martyrs who gave their heads and not their faith.
As a Martyr: While imprisoned on top of an open tower during the cold month of December, Mata Gujjar Kaur Ji continually did simran with no complaints about her physical being. She attained martyrdom the same day as her grandsons after hearing that her grandsons had been bricked alive rather than give up their faith. Her mission had been fulfilled.