Satpal Singh was inside the Westgate shopping mall in the Kenyan capital Nairobi when gunmen opened fire. He describes how he helped to lead some of the trapped people to safety, and even went back inside to carry injured people out of the building, despite coming under fire himself.

I was at the mall for a business meeting – we were upstairs where the Java coffee house is, where the children were doing their cooking competition at the car park.

At about 12:25 we heard lots of gunshots and loud bangs downstairs near the main entrance, so I looked to see what was gong on.

I saw people running in all directions, gunshots being fired everywhere and people falling on the ground. Nobody was going down there to do anything – people were just running away from the scene.

I ran downstairs, and reaching first floor I came across an armed police officer near a pillar and I told him let’s go down and see what the situation is and see what we can do.

To my surprise, he never came down with me, so I just ran down alone where the jewellery shop is at the main entrance. I saw one man with his face down on the floor and another man was by the staircase bleeding. 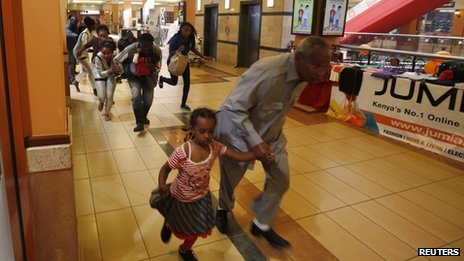 More than 1,000 people were in the shopping centre when gunmen opened fire

As I went to help, I saw a Somali guy running at me from the stairs [and he] fired two shots at me. He was wearing a white shirt, he had a huge bag hanging on his right shoulder, and he was not wearing a mask so I actually saw him face-to-face.

I think they were shooting anybody and everyone who came in their way, or was trying to help the people who had fallen down.

When he fired the first shot I just ducked down quickly. He fired the second shot and he missed me, so then I ran back to the first floor to get this cop so we could go down and confront this gentleman.

When I reached the first floor I couldn’t find the policeman, so then it was back to the top floor. I rushed up there, then pushed everybody into Books First, which is where the cinema hall is, and told the security guard to put the shutters down.

Then we heard the gunshots getting closer so we pushed people up to where the tickets are sold and told everyone to duck down. 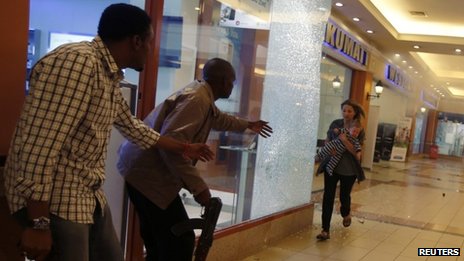 Armed police help civilians trapped in the mall, as they search for the gunmen

We saw two people come up and they were firing in [all directions] and they had bandanas tied on their heads. We couldn’t see their faces properly but we did see that they were carrying bags.

Although the shutters were down, the windows were made of glass. We asked the employees from the cinema if there were any fire exits that we could use, so they took us to the movie theatre to show us where the fire exits were.

After we went through the fire exit, we went onto the top terrace on the top roof, and we blocked the door with construction equipment that was there, because we couldn’t lock the door from the outside.

I think [there were] over 40 people on the roof terrace – there was one policeman who was in his vest who had removed his shirt, I think for safety reasons, so that he couldn’t be recognised by the terrorists, although he was carrying an AK-47.

After about 45 minutes we [looked over to the]… car park where the cooking show was going on, where children were shot, and we saw people [there were] being mobilised toward the Java coffee house fire escape and being taken to safety.

So we all went towards the fire escape on the roof terrace which lead to the Java coffee house, and we started going downstairs, all the way to the basement where deliveries are made.

We could hear gunshots and loud bangs, so as soon as we reached the basement we started pushing people out through the gate onto the streets very fast. 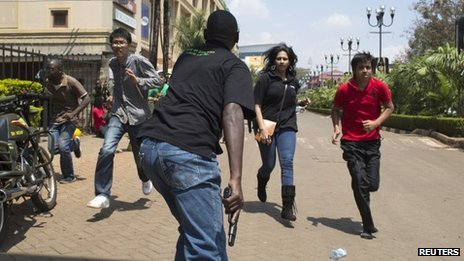 Once we got everybody out, the policeman who was with us went towards the basement to see if there was anybody there, or any terrorists, and he got shot in the leg and he dropped his gun so we had to bring him back out.

I met an ex-British soldier who said there were still people trapped on the top floor where we came from – he said he had touched the eyes of four people and they were not moving, they were dead.

But there were others who were wounded and needed help.

The police officers were armed, they had bullet proof vests, so we [asked them to]… come with us to the top floor and bring these people down. They didn’t help us, so we decided to go up there again by ourselves.

We found people with gunshot wounds – that’s why blood is on my shoes. We carried them on our shoulders down the fire escape and we took them out – we rescued women and children who were injured and wounded.

What went through my mind was just to save people and do what I could for fellow Kenyans.

At that moment you are in a state where you do not care what happens to you, but you want to get out there, you want to control the situation, you want to do whatever it takes to save people.

In the moment you surrender yourself to God and he encourages you, protects you and guides you and shows you which way to go.

Satpal Singh spoke to Newsday on the BBC World Service.