Subedar Joginder Singh Sahnan (26 September 1921 – 23 October 1962), a Saini Sikh , born in Faridkot, Punjab was a Subedar in the Indian Army who distinguished himself by wining Param Vir Chakra, the highest war time gallantry award of Indian Army that any soldier can aspire for.

On 28 September 1936, he was enrolled in the 1 Sikh Regiment. His father’s name was Sher Singh Sahnan who belonged to an agricultural Saini Sikh family which had relocated to village Mahla Kalan near Moga from village Munaka of district Hoshiarpur. His mother’s name was Bibi Krishan Kaur Bhela. He married Bibi Gurdyal Kaur Banga, who was from a Saini family of village Kothay Rara Singh near Kot Kapura. He went to primary school in village Nathu Ala and to village Daroli for his middle school.

During the 1962 Indo-China War, Subedar Joginder Singh commanded a platoon in the Tawang sector of NEFA (North East Frontier Agency). While holding a defensive position on a ridge in Tongpeng La area on Bum La axis, the platoon noticed heavy Chinese concentration opposite Bum La across the McMohan Line on October 20. This was indeed a preparatory to the Chinese advance on Bum La axis on October 23.

At 0530 hours on October 23, the Chinese launched a heavy attack on the Bum La axis. The intention was to achieve a breakthrough to Tawang. The Chinese attacked the Ridge in three waves, each about 200 strong. The attack was supported by artillery and mortar fire, besides other weapons. The fierce resistance of the Sikh platoon, however, compelled the Chinese to fall back with heavy losses. But they regrouped quickly and launched a fresh attack under the cover of an artillery barrage. 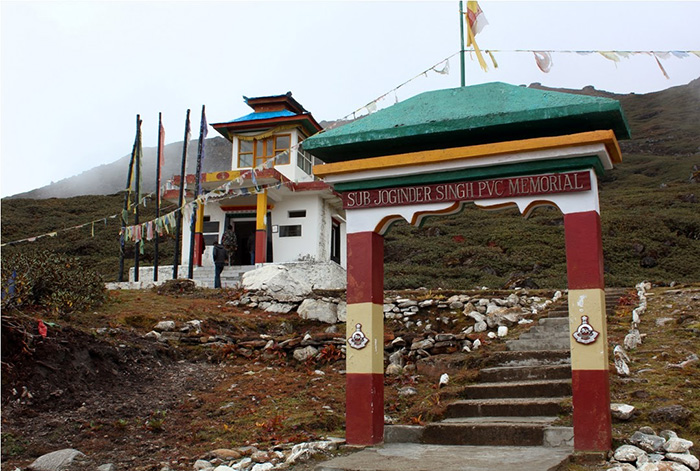 But he could not stem the tide of the Chinese advance single-handedly. The Chinese Army continued advancing with little concern for the casualties. By now all ammunition with the platoon had been exhausted. When the situation became desperate, Subedar Joginder Singh and his men emerged from their position with fixed bayonets, shouting the Sikh battle cry, “Wahe Guruji ka Khalsa, Wahe Guruji ki Fateh.” They fell upon the advancing Chinese and bayoneted many to death.

Finally better weapons and numerical superiority of the Chinese prevailed and Subedar Singh was captured after this epic battle. He died from his wounds and frostbite as a PoW in Chinese custody. One of his fellow soldiers later recalled that when his Chinese captors wanted to amputate his frostbitten foot, he told them that it would affect his chances of promotion after release and refused to undergo the operation. For his inspiring leadership, steadfast courage and devotion to duty beyond all odds, Subedar Joginder Singh was awarded the highest wartime gallantry medal, the Param Vir Chakra, posthumously. 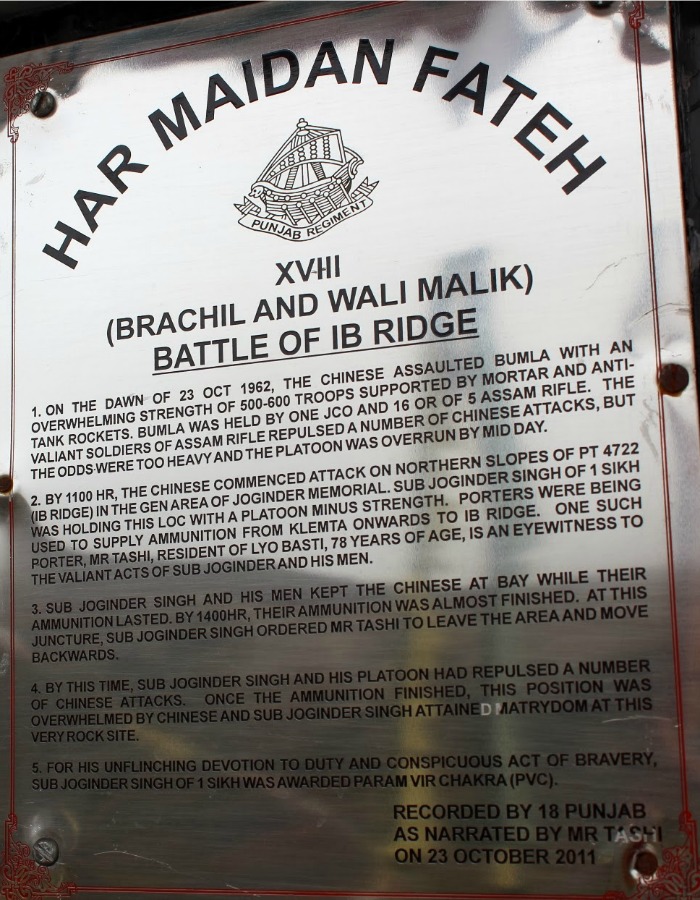 “When the situation became untenable Subedar Joginder Singh and the few men that were left in the position fixed bayonets and charged the advancing Chinese, bayoneting a number of them before he and his comrades were overpowered. Throughout this action, Subedar Joginder Singh displayed devotion to duty, inspiring leadership and bravery of the highest order.”

After he was awarded the Param Veer Chakra, the gallantry award for the highest order in India, the Chinese returned his ashes with full military honours to the battalion on 17 May 1963, which were later passed to his wife in Meerut.

A monument in his honour near the IB ridge speaks about his “unflinching devotion to duty and conspicuous act of Bravery.”

A film named “Subedar Joginder Singh” starring Gippy Grewal is currently being produced. The film is set to release on coming 6th April.