Amritdhari Sikh soldier of the Indian Army leads one of the most toughest and challenging lifestyles.

Gets up at 0330 hours, takes bath, does his holy prayers, goes for physical training (PT) at 0530 hours. Throughout the day, the Sikh soldier continues to do naam simran in his mind and at 6pm he starts his nightly prayers.

He goes onto say that, they are the most brave soldiers, they have written history in India and overseas. Till date, I think they have the max gallantry awards and decorations as a SIKH REGIMENT. ” 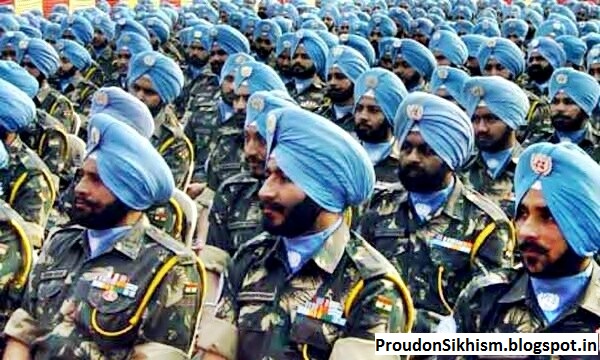 Bulle Shah, a celebrated Sufi Muslim Saint said, “I neither say of the past, nor of the future, but I talk of the time of Guru Gobind Singh and announce openly that if it was not for him, all Indians would have been circumscribed and converted to foreign culture and religion”.

Sikhs were the first to rise and fight invasions by Pakistan in 1960s and 1970s. Pakistan’s invasion lead to full force wars between Indian and Pakistan. Again Sikh, this time joining hands with Hindus contributed and laid their lives down to protect the borders and freedom of India. Pakistan lost all the wars.

Contribution of Sikhs towards the Indian Defense Services is the highest with respect to their 2% population size. This community has also won the maximum number of gallantry awards since independence – 5 Param Vir Chakras (PVCs), 40 Maha Vir Chakras (MVCs), 209 Vir Chakras (VrCs).

Today Sikhs are still 2% of the population of Indian but 20% of Indian Military consists of Sikhs. As a part of Indian Military, Sikhs have constantly been fighting Muslim terrorists on the border of Pakistan and India since last India-Pakistan war.