A new wave of mass conversion into Christianity is taking place in Punjab where thousands have reportedly accepted the faith. The pastors have preached in mass to heal the chronic illnesses in return of the person accepting Jesus Christ into their life.

The low income Punjabis particularly dalits have switched to the faith as Sikh and Hindu groups refuse to accept them as part of their own. The failure of the SGPC and many Sikh groups can be seen from the mass conversions as the population has left their native religion to an foreign faith.

The Christian missionaries are using pictures of Nihang looking Sikhs and other Sikh dressed people to persuade other Sikhs into converting to Christianity.

The image first reported in 2012 on SIKH24 website and since it’s been very widely used on social media.

One video of the pastor has gone viral on social media to which there has been a sharp reaction to.

The Christian Missionaries have stepped up in converting poor Punjabis throughout remote areas of the state. The missionaries offer free education, healthcare, compensation, and other needs to the poor to get them into converting into Christianity.

Pictures of the Sikh looking men get often showed to the poor victims to make them believe that others are switching to the faith.

Often, the missionaries publish false information about the person’s native faith to make them believe that Christianity has more to offer. Sikh beliefs are presented in a twisted way to fool the person.

A widely followed newspaper of the missionaries out of Bangalore published the following headline in a release.

People in Sangrur, Punjab, India had a blessed time as pastor Ramesh Paul shared the word of God and about salvation to many. A number of people attended the meetings in other places too getting to know the savior of the world – Jesus Christ. While at some places, celebrations were held in connection with Christmas season, at other places, the people were introduced to the Bible and explained how Jesus Christ, the savior of the world took away the sins of mankind. Among those who came to hear God’s word were those who had never come to such meetings. The Lord;s name was glorified as many testified of God’s goodness in their lives.” 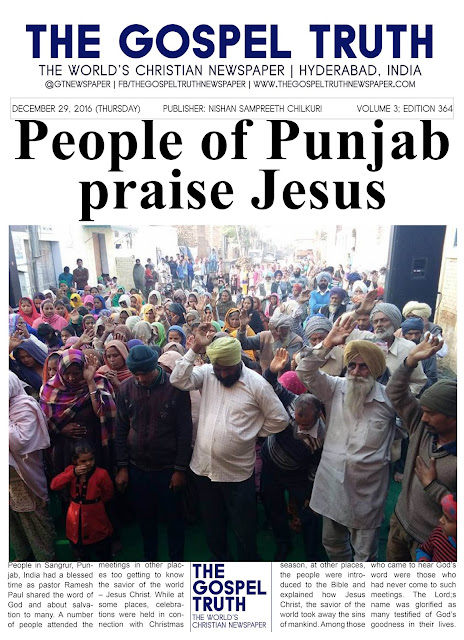