The British Empire constructed various buildings across Sri Amritsar but one particular building created the biggest eye sore in history. The construction of the Gothic tower by the British in 1874 was a terrible decision the British made as it was taller than the Akal Takht building which is suppose to be the tallest building in Amritsar.

The Sikh Museum provides an explanation in the Construction of the tower:

Under British rule came a new vision for Amritsar. This new era featured an exertion of European cultural imperialism marked by the tragic demolition of the lost palace by British authorities and the construction of a large gothic style clock tower in its place to dominate over Darbar Sahib and the Amritsar skyline.

Construction of the clock tower started in 1862 and work on the project would continue for over a decade until eventually completed in 1874 [1] at a cost of over Rs. 50,000. [2] Although a clock tower traditionally has a small base, it was decided that the lost palace and all other buildings in the area would be demolished during construction to create a large open courtyard around the new clock tower.

The Clock Tower at Amritsar now in course of erection, at an estimated cost of 23,000 rupees ; the style adopted in this building is the decorated Gothic. The ornamentation, though simple, is very effective, and the proportions are singularly graceful. It is proposed to place in it a clock with illuminated dials, and as it is situated on the highest ground in Amritsar, and is itself 145 feet in height, it will be a very prominent object in the city. Hand-book of the Manufactures & Arts of the Punjab, Volume II
B.H. Baden Powell, Lahore, 1872

The clock tower was initially designed by the authorities as part of a master plan to be facing a Town Hal [5]. Although wisely deciding to relocate the Town Hall to another section of the city, work on the clock tower continued. The construction of the gothic clock tower and the demolition of the lost palace met with serious disapproval from the Sikhs [6], but the British ignored this and moved forward with their project. While Guru Arjan had Darbar Sahib built on the lowest elevation in the city as a mark of Sikh humility, at 145 feet the gothic clock tower completely dominated the sacred space of Darbar Sahib and the surrounding landscape of Amritsar. 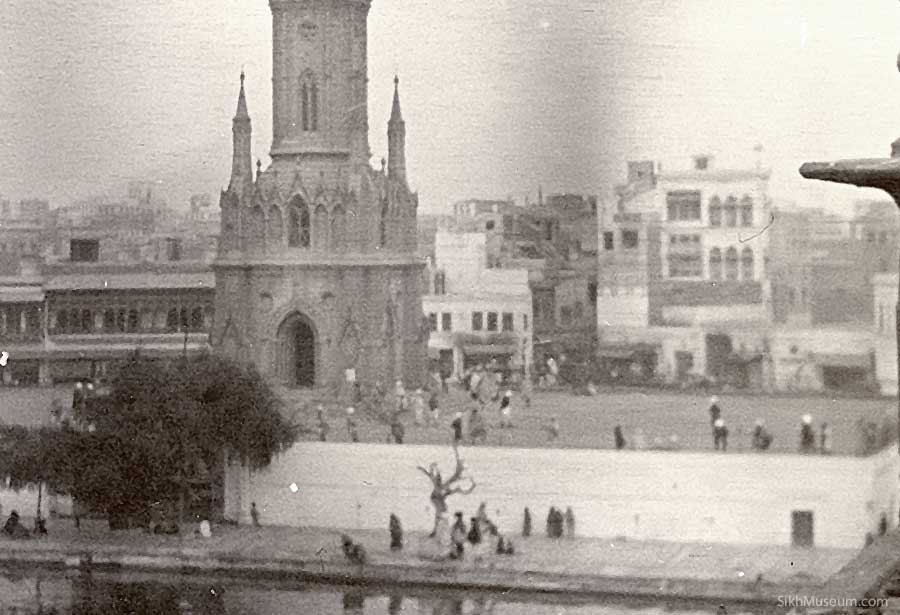 But there is one incongruity, one slightly jarring note, and that is the obtrusive brick clock-tower which dominates the enclosure at the entrance. Built in a style which might be termed Early New England Gothic, it must have reminded many an American wanderer of the fire-engine house in his native village, or the ambitious but inexpensive church-tower of sanded wood. Far from being intended as a gratuitous insult to the Sikhs, it was most probably a generous donation on the part of the European community, meant to serve as a perpetual object-lesson in architecture, and as a dignified protest against barbaric excess of ornament.
From the Black Sea through Persia and India

Although there have been some suggestions that the clock tower was really built by the British as a church, photographic evidence indicates that it only had a weather vane at its pinnacle and not a cross. Also the interior chamber was a relatively small room of approximately 20ft by 20ft, not a very large or practical space for congregations or church services.

Looking completely out of place at Darbar Sahib the clock tower was an eye sore and much hated by the Sikhs yet it would endure for over 70 years.

The British Were going to Auction Sri Harimandir Sahib Ji on April 30, 1877, the plans were to build a giant church.

But Sat Guru Ji Did not let it Happen. A Miracle changed everything, on Morning of April 30, 1877.

September 2, 2013: For those of us who’ve been to Darbaar Sahib Amritsar, we may have noticed a sign outside on the Darshani Deori that reads:

“It is for the knowledge of all that in Harimandir Sahib on April 30, 1877 at 4.30 in the morning, a strange thing happened. There were about four hundred devotees enjoying spiritual peace of celestial music in Harimandir Sahib when suddenly a flash of lighting was seen which in the form of a big resplendence entered through the door on the mountain-side and exploded exactly like a ball in front of Sri Guru Granth Sahib and illuminating everything then went out, becoming a streak of light through the southern door–though at the time of its exploding there was a dreadful and forceful sound, no harm of any kind occurred to any devotee sitting inside and no harm to the building or anything else in the precinct. All the people described this supernatural scene as the wonderful doing of Sri Guru Ram Das himself”

(translation based on one in “Strange but True in Sikhism” by SS Kohli p.11)

This miracle transformed the Panth and brought it back from the brink of oblivion.

After the fall of the Sikh Kingdom in 1849, the Sikhs were in very serious trouble. The Gurdwaras were in control of Mahants who had installed Hindu Idols and barred “low castes” from entering. British observers wrote that Amrit Sinchaars almost never took place. Sikh women lost their distinct appearance and no longer followed rehit or took amrit.

The British even began to photograph Sikhs as they believed this “fading sect” ought to be recorded in history and one day shown in museums as a part of India’s history.

The British also started a heavy mission of conversion amongst the Sikhs. Many notable Sikhs left the faith at this time. Raja Ranjit Singh’s general, Jowand Sikh Mokhal’s family embraced Islam, Beharwala Sardar Isher Singh became Muslim under the influence of a prostitute, Harnam Singh of the Kapurthala Royal family became Christian, Dayal Singh Majithia became a Brahmo Samajist and gave over the Daily Tribune, Dayal Singh College and a Library to the sect.

Big Sikh landlords Mangal Singh Virk and Charat Singh of Barhar became Muslims for Muslim women as well. In 1873, 4 Sikh boys Aya Singh, Attar Singh, Sadhu Singh and Santokh Singh announced they were converting ot Christianity and prepared to cut their hair. Later they were convinced not to do this.

Harmandir Sahib was under the control of the British Government and they had appointed a Sikh manager, Mangal Singh to look after the site for them. The British had nefarious designs for the Sikhs. They had intended to make Sree Darbaar Sahib the main Diocese for the Christian Church and convert the complex into a giant church. Crucifixes were even put near the entrance of Sree Darbaar Sahib near the foot-wash area.

Sardar Mangal Singh heard these rumours and despite being pro-British, felt very upset. He met with Punjab’s Lt. Governor to ask about this issue and he did not give any reassurance but asked him to speak with the Viceroy.

The Viceroy was at this time in Gobind Garh fort in Amritsar. Sardar Mangal Singh went to meet him and was told that the British were lawfully entitled to own, manage and dispose of all property owned earlier by the Sikh regime. They could do as they wish in the future.

The Sikhs came out very dejected and sat in a Gurdwara trying to understand what to do. They decided to hold and Akhand Path Sahib in Darbaar Sahib and do Ardaas that the most precious place of the Sikhs would be saved.

The next day, the sangat gathered at Harmandir Sahib and Asa Di Vaar began. An intelligence officer sent by the Viceroy was also present to watch over the gathering. At 4.30AM, the ball of light entered and stopped in front of Guru Granth Sahib ji and then did as was described above. The Sangat began to repeat “Dhan Guru Ram Das!”.

News of this event went all over Punjab. The hundreds of witnesses all gave their names as proof of this great miracle. The intelligence officer too was stunned and advised the British Government that any attempt to take over Darbaar Sahib would be wrong.

This incident was Guru Ram Das himself blessing the Sikhs. It showed the Sikhs that Guru was not far, but always watching over his Panth. At a time where amritdhari Singhs were almost extinct and Hindu ritual had taken hold in the Gurdwaras and Sikhs were converting away en masse, Guru Ram Das enacted this miracle and revived and awakened the Sikhs.

The Gurdvara Reform Movement gathered steam, Singh Sabha Movement threw out the Hindu influences and again the Panth began to emerge and grow. The entire Panth rose up to save Sikhi. The Sikhs were saved from the brink of extinction.

In today’s age, when again Sikhi is threatened by governments, and Sikh youth are confused and misguided, it is time for a Sikh Revival. It is up to us to save our Panth. And if we take the initiative, we should rest assured Guru Ji is watching us and will certainly give us victory.

Originally Posted By Sikhnet in 2009

“…The stunned Sikh onlookers ascribed its appearance as a divine sign from Guru Ram Das, but the colonial administration spun it differently: ‘We think it is also a sign of the great prosperity of the British Rule’….

…..However, a far more sinisiter side to the British motives that fateful morning has emerged from the oral tradition connected with the shrine. The truth of the matter was passed down from sarbrah to sarbrah, until Professor Sahib Singh (1892-1977), the eminent Sikh scholar, revealed a secret, darker, backstory in his autobiography:

Sardar Sunder Singh Ramgarhia, sarbrah, and I were going in a horse carriage to Tarn Taran….On the way he related to me an astonishing incident. He said, ‘This occurance I heard from the sarbrah before me [Arur Singh]. The English had heard of the many great heroic deeds of the Singhs, and that they got the power to perform these great sacrifices and deeds from bathing in the tank of Amritsar. So in order to finsih off the Sikh threat forever, the English decided to auction off the Harimandir Sahib and the surrounding area around the holy tank. The day of the auction was decided to be 30th April 1877. All the English officers came and sat down in the Harimandir Sahib. What else could the poor priests do apart from offer prayers at the altar of their true Master? The miraculous incident that happneded next is written on the entry gate of the Harimandir Sahib.

Sardar Sunder Singh, sarbrah, then said to me, ‘All this was told to me by the previous sarbrah. He said that on seeing this miraculous sight, the English officers filled with fear. They decided not to go through with their evil scheme, and instead made offerings of Karah Prashad. The True King is the protector of his devotees’ ”