Sikhs comment on the life of Bhai Jeevan Singh Ji

Sikhs on social networks are commenting on how such a great Gursikh Bhai Jeevan Singh was: Gurmukh Singh from UK Writes:

“A truly blessed and very humble gursikh. He inspired me as a young undergraduate to follow the path of spirituality and social justice. I can remember once without any request from me he literally took off his bana and gave it me. A most amazing quality was his memory. He could remember peoples telephone numbers and names off by
heart and though he knew many people, he would always make you feel special.
RIP Bhai Sahib Ji “Wahe guru ji ka khalsa wahe guru ji ki fateh”

“BHAI JEEVAN SINGH JI LEAVES HIS BODY TODAY
A truly blessed soul.. He has been separated from us but his actions, memories, stories and love will remain forever. A true Gurmukh, the embodiment of peace, love, compassion, contentment and humility.”

Bhai Jeevan Singh jee is one the Panth’s jewels who is the image of humility and saintliness. Bhai Sahib’s life has been devoted to the sevaa of the Panth and humanity. He has served as the Head Granthi at Takhat Sri Patna Sahib and has done keertan sevaa with the Akhand Kirtani Jatha for about 40 years. Since 1977 Bhai Sahib has toured different countries to spread Gurmat (the Guru’s teachings) and has inspired countless to become the Sikhs of the Guru through his exemplary character and behaviour. For the last couple of years, with old age and ill-health, Bhai Sahib has not been able travel and is very frail. Sadly, I have never had the opportunity to have Sangat with Bhai Sahib jee, however Guru jee blessed me with Bhai Sahib’s darshan last February in India at their home in Amritsar. Due to Bhai Sahib’s health at the time he was unable to move around or talk. Waheguru. May Guru jee keep such Gursikhs in Chardi Kalaa and may we all become inspired to improve our own jeevan (spiritual life) with Guru Sahib’s kirpaa. 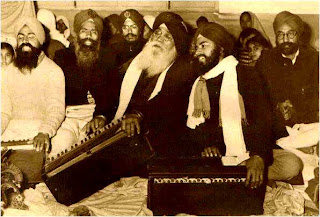 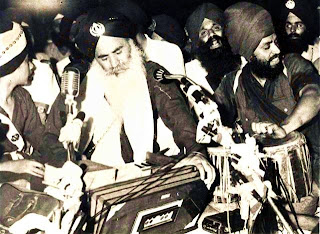 Bhai Saheb Jee, the Sooraa:
When Operation Blue Star happened in India, a year later a big march was organized (an annual event) in Washington, DC. All the “leaders” made big speeches. Bhai Saheb Jee was invited to the podium. At the US Capitol steps he said calculated words: “Khalistaan Mangan Vaaleyo, Khalsey Bano!” ’nuff said!


Bhai Sahib and Amrit-Velaa
There was a young Singh in England who had taken Amrit for about a year. His Amrit-velaa (habit to wake up early) started getting slack. He used to do Amrit-velaa with Gursikhs regularly at a Gursikh’s house but he gradually stopped attending daily. One day, early in the morning at Amrit-velaa, the Singh was asleep and hadn’t woken up for Amrit-velaa. His father was at work on the night shift and his mother was up doing her paath when suddenly the phone rang. Bhai Jeevan Singh jee said, “Is bhaji there?”The Aunty jee replied, “No, he is working on a night shift.” Bhai Sahib said, “No, I am not talking about Pita jee. Is Bhaji there.” (Bhai Sahib always makes himself out to be the youngest, such is his humility). The Aunty jee rushed up to wake up the young Singh and tell him to answer the phone. The Singh shared the Guru’s Fateh over the phone with Bhai Sahib and then Bhai Sahib said, “Bhai ji, you haven’t done kirpaa (mercy) on me today, it is Amrit-vela, and you forgot to wake me.” There was a silence. The Singh felt so embarrassed for missing Amrit-vela. The Aunty jee and son looked at one another wondering how Bhai Sahib living in Canada knew that he had missed Amritvela that day. 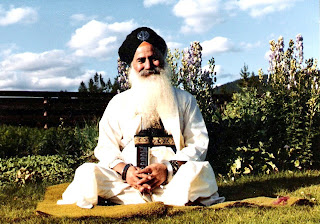 Accepting Akaal Purakh’s Will
Bhai Sahib visited a family in England in the late 1980s and stayed at the house for Akhand Paath sevaa. Bhai Sahib listened the Paath for many hours and corrected the Paathis (readers) when they made a grammatical or pronunciation error. Seven or eight years later Bhai Sahib came back to England and was invited to the same family. Several years earlier the Singh whose house it was had passed away. When Bhai Sahib jee asked the lady about her husband she became emotional and as soon as this happened Bhai Sahib jee went upstairs in Sri Guru Granth Sahib jee’s room and stayed there. He never came down and after a good 4-5 hours the bibi asked her daughter to ask Bhai Sahib jee to come down. The girl went upstairs and found Bhai Sahib jee sitting in smaadhee (meditative pose). She asked them to come downstairs, to which Bhai Sahib replied that she should tell her mum that he will only come downstairs after her mum accepts the Bhaana (Will) of Akaal Purakh and not to become emotional about her husband. The Bibi agreed and Bhai Sahib jee came down and later did keertan at the house. 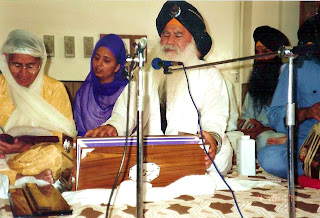 Bumping into a Mona
One evening, the Gursikhs had just finished doing kirtan at Gurdwara Singh Sabha, Slough (England). A Singh phoned and said that had booked kirtan in Hounslow, and that the Gursikhs should come straight away. Bhai Jeevan Singh jee said, “Lets go quickly, we should always be on time”. As Bhai Jeevan Singh jee, his singhni (wife), and two other Singhs walked downstairs into the shoes section, a mona (man with hair cut) was walking in to the Gurdwara. Accidentally, he bumped into Bhai sahib. He said “sorry,” and looked into Bhai sahib’s face. Those who know Bhai sahib know how enigmatic his smile is, and how his face always shines. Bhai sahib said to him, “I came here especially to see you, I have something for you.” Bhai sahib then took off his dastaar (turban) and handed it to the youth. The mona youth could not believe his eyes; Bhai sahib said these words to him with so much honesty, pyaar (lovingness) and humility that from that day on the boy kept his kesh and came into Sikhi. 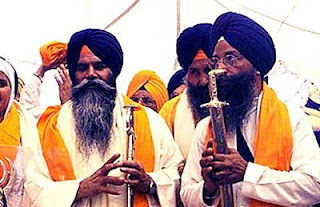 In 1995 Professor Manjit Singh, the then Jathedaar of Sri Akaal Takhat Sahib called a World Sikh Samellan (conference). Every Gurdwara, Sikh organization and jatha (group) from around the world was invited and many days were spent discussing Panthic (Sikh national) issues affecting Sikhs. Thousands of Sikhs gathered, including all the big leaders and personalities within the Panth. Many people such as political leaders were centred on themselves and wanted special treatment, but everyone was treated equally. No dignitary received special attention. However for some reason the Panj Jathedars of the five Takhats sat on a sofa in the complex where this was happening. As the A-Z of Sikh leadership sat in the sangat on the floor, a simple Gursikh walked into the complex building. He walked in humbly, did matha tekh, and went to sit in the sangat. However straight away, the Jathedaars got up and ran over to him, and said to him, he must sit on the sofa. Totally embarrassed he refused. But they brought him over and sat him on the sofa. He sat uncomfortably because he was not one for that kind of attention. That Gursikh was Bhai Jeevan Singh jee. It goes to show how highly Bhai sahib, his jeevan, his seva, and his nimarta is respected in the Panth, that only he was singled out for such attention. It is the virtues of Guru, such pure humility, that pulls at peoples hearts. 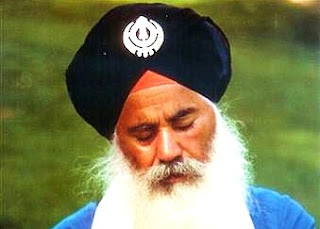 Great humility
A Muslim man passed by Bhai Sahib somewhere and he stopped and looked at Bhai Sahib’s face. The man goes up to Bhai Jeevan Singh jee and says “I can see ‘Allah Da Noor’ (the Light of God) in you”. Bhai Sahib folded his hands and humbly said,”O great man! Can you please give me your wonderful eyes with which you see such wonderful things.” Another time, there was Sangat sitting in Canada and someone approached Bhai Sahib with a question in front of others. He said, “Bhai Sahib, you tell us – as you have met God.” Bhai Sahib replied with a humble and astonished “Achaa? (O really?)” and walked away. 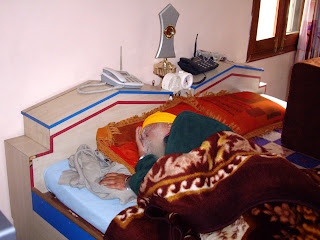 Despite ill-health
Bhai Jeevan Singh jee now lives 5-10 minutes away from Sri Darbar Sahib in Amritsar. Bhai Sahib would occasionally go and do keertan seva there whenever it was his turn/duty. One day his wife locked the door of his room to make sure he didn’t go to do keertan seva that day because Bhai Sahib was very sick and she knew that Bhai Sahib would still want to go to Sri Darbaar Sahib. When his wife turned on the television she saw Bhai Sahib doing keertan (I think it was Asa Di Vaar keertan). She brought someone else to the television and showed them and they said it’s probably a recording. Still in doubt they opened the locked room and went in and found that the window was wide open and Bhai Jeevan Singh jee no where to be found. He had jumped out of the window somehow and went to do keertan seva even though he was really sick. This was the dedication of a beloved Gursikh for his Guru.
Source: Manvir Singh

Jalandhar: When others are busy in the hustle-bustle of the celebrations of Guruta Gaddi Diwas, there are two octogenarians, with rare glow on their faces, who are quietly engaged in the recitation of Gurbani. The astonishing part is that they remember by heart almost the entire holy book spread over 1,430 pages. Just consider the vastness of the scripture. According to SGPC website, Guru Granth Sahib contains 5,894 hymns and the number of stanzas are 15,575.

The first one is Bhai Jiwan Singh, who lives near the Golden Temple and gets the oppotunity to listen to the continuous kirtan and the second one is Bhai Surat Singh, known as “Pooran ji”, who starts his daily routine of “path” just around midnight.

“It is not yet known about any other surviving member of the community who has been able to memorize the vast holy book. There were some more such persons but they were not alive,” says Balwinder Pal Singh, editor of a journal.

Remaining reticent and epitomizing humility the two prefer not to make any such claim or even discuss it but those who know them reveal their accomplishment. “Just read out one line from any hymn and both will complete it,” says Ranjodh Singh, co-editor of another journal, who knows the two quite well.

A revered spiritualist in the Sikh community, Bhai Jiwan Singh has travelled extensively around the world. However, for the last couple of years, as age took over him, he remains confined to his house.

“In which ever house he went kirtan started emanating,” says Jaswinder Singh Khalsa, an NRI living in UK, who is also chairman of the Sukrit Trust and owes change in his life to the spiritualist.

“He not just transformed lives but also played a role in starting several welfare projects,” reveals Harkirat Singh, former GM of Coal India and now trustee of Satnam Sarb Kalyan Trust, which was got started by Bhai Jiwan Singh.

About Pooran ji, who retired as district manager of the FCI, his son-in-law Kuljit Singh revealed that after retiring to his bed at around 7.30 pm he gets up at 10.45 pm. Then after a bath he goes to Darbar Sahib around 11.45 pm and just after midnight he along with some other devotees starts recitation of Gurbani at the “parikarma”. “Then he goes to the sanctum sanctorum when its doors open after 2 am and after listening to kirtan he returns. He remains engrossed in reciting “path” in the day also,” he disclosed, adding that “he can listen to kirtan for continuous 12 hours.”