Bhai Tara Singh Wan was an eighteenth century Sikh martyr. He was from the village of Wan, also known as Wan Tara Singh and Dall-Wan now in Amritsar district of the Eastern Punjab.

Bhai Tara Singh, the eldest of the five sons of Gurdas Singh, was born around 1687. He took Amrit from Bhai Mani Singh. Receiving the rites of initiation, he grew up to be a devout Sikh, skilled in the martial arts.

Local lambardar Sahib Rai would often let his horses loose on land being cultivated by local Sikhs in Naushera to which Bhai Tara Singh objected as it was destroying the fields.

Rai lodged a complaint with Mirza Jaffer Beg, Faujdar of Patti. He said to him, Tara Singh is an old rebel. He is very dangerous. He gives shelter to thieves, dacoits, and bad characters. They commit raids all over the land. The lives and property of the people are insecure. An example must be made of this dangerous rebel. Otherwise others will begin to imitate him. Jaffar Beg, assisted by a contingent of 25 mounted soldiers and 80 foot soldiers proceeded towards the residence of Bhai Tara Singh to teach Sikhs a lesson. 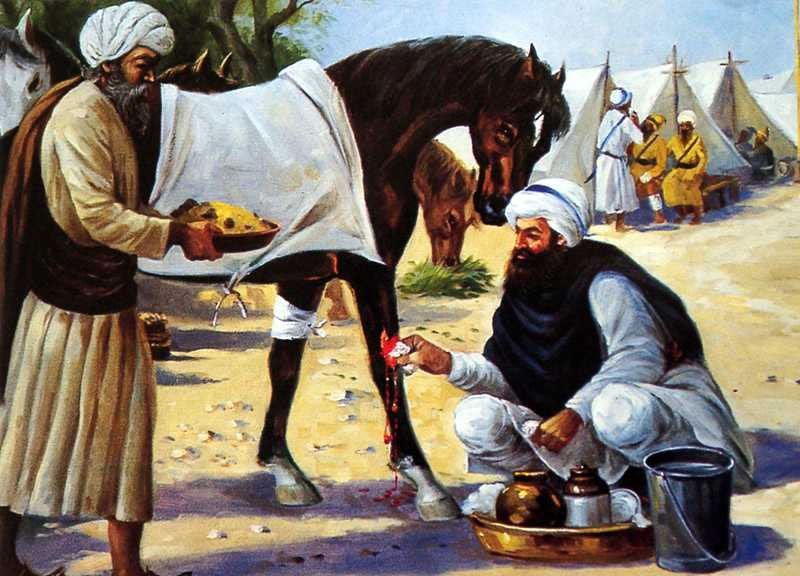 They intended to take the village by a surprise attack at dead of night. But their plan was foiled by a brave saint-soldier, Bhai Baghel Singh.

This brave Khalsa happened, at that hour, to be out in the jungle near the village. He saw the soldiers approaching the village. He immediately understood what their mission was. He decided to block their way so that Bhai Tara Singh and his companions should not be taken by surprise. With a shout of ‘Sat Sri Akal,’ he suddenly fell upon the advancing soldiers, as a tiger would fall upon a flock of sheep.

With a one stroke Bhai Baghel Singh cut off the head of a nephew of Jaffer Beg. Other nephew met the same fate. Many more soldiers were cut down by him before he was overpowered. He died fighting like a true saint-soldier. The noise of fight roused Bhai Tara Singh and his companions. They rushed out to meet the invaders but they took to their heels before Bhai Tara Singh could give them battle.

Jaffar Beg could barely save his own life by beating a hasty retreat. Jaffar Beg went straight to Lahore and narrated the incident to Zakariya Khan, Governor of Lahore. He sought his support to avenge his humiliating defeat at the hands of Sikhs. Zakariya Khan was a sworn enemy of the Sikh community. He ordered his commander, Momin Khan, to immediately mount an attack on Sardar Tara Singh’s abode and produce him dead or alive before him.

Such was the terror which the brave Sikhs inspired in the Mughal rulers’ hearts. The news of this expedition was conveyed to Bhai Tara Singh by a secret messenger from the Sikhs of Lahore. Another man, named Ghumanda, offered to act as a scout for the Lahore army. At the same time, he sent information to Bhai Tara Singh.

Some men went to Bhai Tara Singh. They advised him to go away and take shelter in the jungle. But he refused to save his life by flight. He thought that to run away would be a cowardly act, unbecoming of a Khalsa. He was determined to face death with boldness, and sell his life very dearly. The invaders came at nightfall. They surrounded the village. As they advanced to attack, they were greeted with a rain of shots and arrows. Bhai Tara Singh and his 22 companions held the army at bay during the night.

Momin Khan, instead of himself moving forward, sent forward his nephew Mureed Khan. In a swift attack, Mureed Khans head was cut off with the blow of a sharp sword by Bhomi Singh.

The Sikhs were able to inflict heavy losses on the enemy. The invaders were very near losing their hearts. They got the impression that Bhai Tara Singh had a very large force with him. They began to doubt their own power to succeed against him. But the rising of the sun betrayed the true number of Bhai Tara Singh’s men.

Momin Khan ordered his entire force to attack the Sikhs at the same time. Thus ensued a hand to hand fight. Bhai Tara Singh and his men fought with wonderful bravery, killing hundreds of enemy soldiers. Not a single Sikh surrendered to the enemy. One by one, the Sikhs men fell martyrs after performing wonderful feats of valor and swordsmanship.

At length, Bhai Tara Singh was left alone. He sprang to the enemy’s ranks, roaring like a lion. With his sword he cut his way to the spot where Momin Khan was. The latter was riding on an elephant. Bhai Tara Singh aimed a heavy blow at Momin Khan. But as he leapt up to reach the man, he surrounded by a large number of Mughal soldiers. They fell upon him from all sides and cut him to the ground. Thus did Bhai Tara Singh die gloriously after a valiant fight against heavy odds. He fell in a noble cause. He sacrificed his life in order to serve and save his brothers in faith. He was thus a true martyr. Bhai Tara Singh’s memory is cherished by the Sikhs, as of course, it richly deserves to be. Their heads were taken back to Lahore and thrown in blind well where Gurudwara Shaheed Singhania now stands in Landa Bazar. A Gurudwara Sahib now marks the site where the dead bodies of Bhai Tara Singh and his 21 companions were cremated.

This was how the Sikhs tried to defend themselves against the cruel Mughal muslim tyrants in Punjab, India. The Sikhs fought to the finish, inflicting heavy casualties on the enemy forces. We are thankful to these early Sikhs because of their bravery and sacrifices the Mughal rule finally came to an end in Punjab towards the end of eighteenth century.